Our recent newsletter item explained that Mike, Fiona, Jacqui and Tony were all planning to retire from the Eacdg committee, and invited interested members to contact us to discuss taking on club roles. I'm very glad to say that some capable people have expressed interest in getting involved and replacing the retiring committee members:

Of course it's up to you, the club members, to choose who represents you, and we invite expressions of interest from any other members who may consider committee or officer work.

The FEI and BC have introduced some significant rule changes for 2013 - please read below how we are adopting these.
We will detail these more in the events competitors' letters - the interpretation and understanding may evolve during the season!

The walk, Section D, has been replaced by a Transfer section of 800-1000m.
The Transfer is any pace, meaning you can walk, or trot or canter etc. In practice we'll give you enough time to walk this section so your horses can arrive at the 10 minute halt a little more relaxed.
Although this section still has a Time Allowed, nobody should fail to make that - it will allow a normal walk and you can always trot, so we probably won't score it (but reserve the right to, for anyone who's late at the halt).

Up until now pre-novices and novices have had a standing presentation judged and scored 45-30 minutes before dressage - and sometimes felt stressed by this.
For 2013, novices and prenovices will have a safety check before dressage (not scored) and will have presentation judged on the move during the dressage test like the Open classes. The safety check is to ensure we don't completely lose that safety aspect of the presentation. Of course we can't guarantee to catch everything or "make you safe", that remains the driver's responsibility, this is just an extra pair of eyes.

You can enter more than once

Subject to timetabling, you can enter more than one turnout in the event. Up until now we have accepted multiple entries but made the second entry h/c - outside the competition.
Note that we will follow the FEI/BC rules on this, in that the scheduler will randomly allocate which of your entries goes first. This is to discourage canny competitors from getting advantage by checking out the course with a stalking horse before their best horse.

We've been lucky with the weather compared with many areas and all our events have run, with mostly very pleasant weather. We're lucky to have some well drained venues, and East Anglia is traditionally drier and milder than most regions. 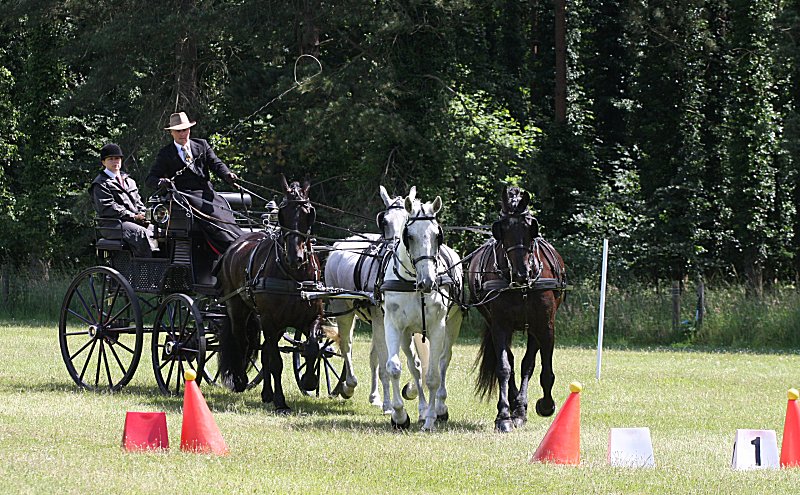 Once again we missed [nearly all] the showers and the going was excellent. An interesting cones course and a particularly pleasant choice of marathon route for the club competition

Lucky with the weather - after a windy start blowing the cones away as we set up on Friday, the weekend was breezy but dry and with some sun - a good entry and all ran smoothly.

We've got a strong programme of events this year and new committee members to help us do more.

We've had two excellent events to start the 2012 season, a one day and a two day at Ashfields with excellent entries - thanks to all who helped and took part.

For our first 2012 one day, Monday 9th April, Ashfields, we had to close entries at just over 60 - our record for a one day - and despite some rain the ground held up well and everyone seemed to have fun.

The two day event April 21-22 at Ashfields had just over 70 entries - the weather was a concern but was mostly dry, even seeing some sun, during the competition and again the ground held up well for a terrific event.

The Eacdg 2012 yearbook is posted out to you when you rejoin - or handed to you when we meet to save the club (=you) postage - so please, rejoin now!

The event dates are on the events page with the schedules and online entries to come shortly - please put in your diaries.

The Eacdg 2011 yearbook is now available online here and we post it out to you when you rejoin - so please, rejoin now!

The event schedules are on the events page and you can enter the events there... please come!

The one day training on 9th April was well attended, followed by our biggest entry for a one day event on April 10th, 47 entries, with drivers enjoying a competition in the spring sunshine.

Please come to your AGM, Sat Nov 20th, evening, with meal, at Ashfields
This is a social get together as well as a time to plan for next season and to receive awards and trophies.
6pm for 6:30pm AGM, meal around 7pm. Please let Zoe know you are coming.

Free to all members, helpers and people associated with the club.
The Eacdg 2010 yearbook is now available online here and we post it out to you when you rejoin - so please, rejoin now!

The Eacdg follows the BC rules, which in turn follow the FEI. These rules have been extensively rewritten for 2009, though the rewrite is mainly to make the rules easier to read, with few real changes.

Changes which may affect club drivers include:

You are invited to the EACDG's Annual General Meeting is on Sunday, 23 November, at Ashfields Clubhouse at 11 am.

Although only driving members can vote, all our members and volunteers - everyone who has helped us at events - are invited to attend the meeting. Our plans for 2009 will be announced and club trophies will be presented after the meeting. It's a chance for you to put your views, ask questions and to find out more about the club and its plans, as well as to see friends.

And to lunch...
Members and all volunteers are invited to join us for a free lunch after the AGM: do come! Vegetarians will be catered for, too. If you wish to join us for the meal, it will be served at about 1pm. We need to know how many to cater for so please call Zoe Morgan 07770 944 868 to confirm your name is on the list of those attending. Thank you. Eacdg Sandringham Two day event 28-29 June we had good weather and an enjoyable event. Results here.

Sunday 23rd March 2008 Ashfields This lunch is to say thank you to everyone who's helped us at events in the past and also to encourage newcomers to join the squad of friends and helpers. We couldn't hold driving trials without volunteers! Free for helpers, past, present and future, and also for drivers who bring helpers to the lunch. Please bring your friends, family and neighbours who are interested in helping us this season.
There will be a short talk about horse driving trials and our season's events, the chance to ask questions and to find friends old and new.

These were kindly awarded by Wilf Bowman-Ripley.

The Spring & Summer Events at Ashfields were qualifiers. At each event young drivers competed in their categories, within the main event. Points were awarded for each individual phase. i.e. Dressage, Cones and Marathon.
For example:- 10 points for the first place, 9 points for the second place, 8 points for the third, etc., down the line, up to sixth place.
The points from the Spring & Summer event were added up at the end of the summer event. The winners of each category received the scholarship as follows:
Novices: £150
Intermediate: £350
Advanced: £500

For latest updates see our Spring 2007 newsletter and the on-line forum.


Many Eacdg members did well in the indoor driving finals on 31 March-1st April 2007 at Keysoe, with Alan Clarke, below, winning the teams class. 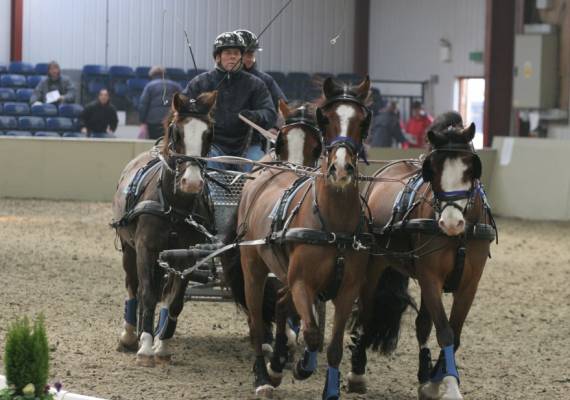