Musings of a tandem driver by David Taylor 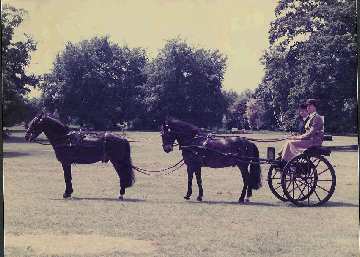 I think I probably have the right to call myself a tandem driver, after all I drove my first tandem competitively in 1983 and competed almost every year since until my last pony tandem in 2003. I am now up and running again with a horse tandem and so at least twenty years under my belt. So how did I get into tandems?

The first pony I drove was an old children's pony, Sally, which we put-to to a Governess Car using old Indian Harness and a good deal of baler twine. We drove that a few times and the learning curve began, quite steeply. First of all how to hold the reins, not so difficult, although pictures in a book are not that clear ever. I remember particularly a drive out to a village called Eynsford, from just North of Riverhead (in Kent), a very nice drink in the pub and a picnic. We tied the pony up to the pub fence and left the cart on the double yellow lines. We were in due course accosted by a puffed up traffic warden, oh dear, a parking offence so soon, but no points on (no licence); meanwhile the local children took the pony for a paddle in the river on the other side of the road. A good start. On the way home we suddenly changed from a sedate trot to an anything but sedate canter. The cart was in danger of collapsing, not built for speed (nor was the harness). We hurriedly left the main road and galloped past the front of Eynsford Railway Station to the surprise of a local taxi driver and a British Railways employee and few pending passengers. We passed much too quickly to determine the BR mans status or to comment on the lovely sunny day. It was only as we had passed the commuters cars and then the coal bunkers and wood stacks, and were thinking about whether to opt for the unobstructed branch line to Otford, or to try our luck between the goods trucks in the sidings, that we noticed that the lunge whip in the whip holder was flicking Sally’s well rounded hind-quarters. This had been greatly exaggerated as the two wheeled Governess Car pitched and bucked with the ever-increasing motion at the canter. Fortunately on picking the whip up, good old Sally decided that it was getting a bit hot and a gentle walk was indeed an acceptable alternative pace at her ripe old age of twenty-three years. We had not noticed in the pictures that the whip should be carried and not in an holder, nor that most people did not carry a lunge whip but rather smaller versions.

We drove her a number of times that summer before moving away to Devon and coming out of ponies. But the excitement had given me a taste for driving, much more relaxing than riding, and more sociable.

After living for a while on the north side of Dartmoor, where we had riding horses, we moved to Braintree, and no equines, and then on to Southend. Once established there we again thought, horses, but felt the area was unsuited to riding and much better to try driving again. We bought a feisty little 11.2 HH pony, Ruschian, from a gypsy on the end of a chain (the pony not the gipsy). We ourselves broke Ruschian to drive, again, with the help of a book, and drove again to a Governess Car, this time a very dainty little model. Peter my eldest son was now one year old so obviously well suited for trips in such a vehicle. I adapted a wickerwork bicycle seat so that it allowed him to be securely strapped in to it, while it was then plugged in to slots on the seat. The idea was to allow us to eject him safely if we ever felt the need. We of course made sure he had a suitable crash helmet! I am pleased to say we never had to bale him out into the hedge, I am sure he is quite pleased about that too. He will not remember because he invariably fell asleep as soon as we moved off, well worth remembering if you have children or grand-children that will not sleep.

After a year of pottering around the lanes of Great Wakering and the residential roads of Southend itself we felt the need to move on all a bit tame.

We then somehow became aware of the Windsor Park Equestrian Club. We had acquired an original design Bennington by then, so off we went to WPEC. We had a VW Caravanette and Bahill pony trailer into which we got carriage and pony. My wife and I took it in turns to drive at a couple of WPEC events each before going to Osberton where she drove, and to Bicton where I drove.
By now we both wanted to be driver, so rather than argue (well maybe, as well as arguing), we got another 11.2 HH pony. We loaded both the ponies and both of the carriages into the trailer and the VW struggled but coped. How? Well I fitted car ramps inside, at the front of the trailer, so the John Willie carriage we had as well by now, could be pushed in and be lifted higher up so that the shafts were above pony head height. The shafts then clamped against the trailer roof at the back. A barrier was then fitted behind the cart and pony number one went in sideways. Then another barrier and pony number two. The ramp went up and a flip down frame on the back then took the Bennington tipped up with shafts skywards. Quite a load!
We competed at WPEC a few more times as two singles before the winter break.

We then separated! I was left with two small Dartmoor ponies. Driving a pair would mean getting another carriage and different harness so, yes you guess right, tandem had to be the way forward, it looked quite straight-forward and there was no spoil sport to put me off.

I hired an indoor school and with a friend to help we set about putting the two in line. The book now gets a lot more difficult to understand, just how do I hold the reins. Anyway it seemed to work. Once I got around the problem that if the leader (good old Ruschian) was in draft, and if the wheeler (not so good old Ollie) the bastard gave me two feet in the stomach once when I walked past him tied to the lorry) was sitting on his breaching, the two would have a trial of strength in opposite directions, then we seemed to go nowhere. Next two times I drove to the grass car park at Shoebury East Beach where I put-to and then charged around the car park honing my tandem driving skills. The sixth time I put them together as tandem was at WPEC for a dressage and cones. By now I felt ready for National competition. In those days there was no need to qualify at club level or any other way. The only club was WPEC anyway. I duly appeared at Cricket St Thomas where I go round after a fashion and won the combined tandems. Sarah Garnet the only other tandem lost a wheel on the marathon. Cricket St Thomas was a Safari Park, and the obstacles had interesting diversions such as pigs in pens and sheep. There were also the camels (not my opinion of your horses, real camels). They were in a pen with obstacle two built on to the front, in all the slurry that was running away from the camel’s pen. That was the wettest weekend for many a year, the water obstacle was withdrawn after a pair became so bogged down they had to be rescued. Anyway, the camels did not impress my ponies. They threw themselves onto the nearest solid post, whereupon I fell into the foot-well of the carriage, reins around my ears. I was still driving coachman, yes cross-country too. Nobody ever told me that there was any other way to hold the reins; coachman and camels are fun, especially in wet camel dung. At that point I began to suspect that driving a tandem was a might more tricky than I had originally thought. Never mind, I was never a quitter so I persevered and by obstacle seven I was doing quite well, only scraping posts a bit, no falling out.


I did not win again for quite a long time. By the third event I realised that most other people held the reins in each hand, and over at least the next year I experimented with all manner of ways of coupling, lacing, buckling, holding free, tying, the reins so that I could drive two handed. They seemed to have a knack of becoming separated at critical moments, resulting in dramatic changes of direction and wild grabbing at flailing reins disappearing over the carriage floor.
The rest is history; I have gone on to build on my early experiences, still learning a lot the hard way. I have developed very quick reflexes. I think that my learning curve has helped in that. You may now understand why at times I do not always appreciate that newcomers to the club (EACDG) may need help at fairly basic elements of driving. I never had any help or advice and always managed, and tend to assume that everyone else just decides what they want to do and then just gets on and does it. This probably applies to many other seasoned drivers, so please understand if we forget that the world has changed. Its like at work as a vet; when I started a new graduate was thrown in at the deep-end, while now a days they are so, so molly coddled ... but that is another story.

Anyway, please do feel free to ask, we never mind, and you never know we may have some tips to save you learning the hard way; you might miss out on some fun though!